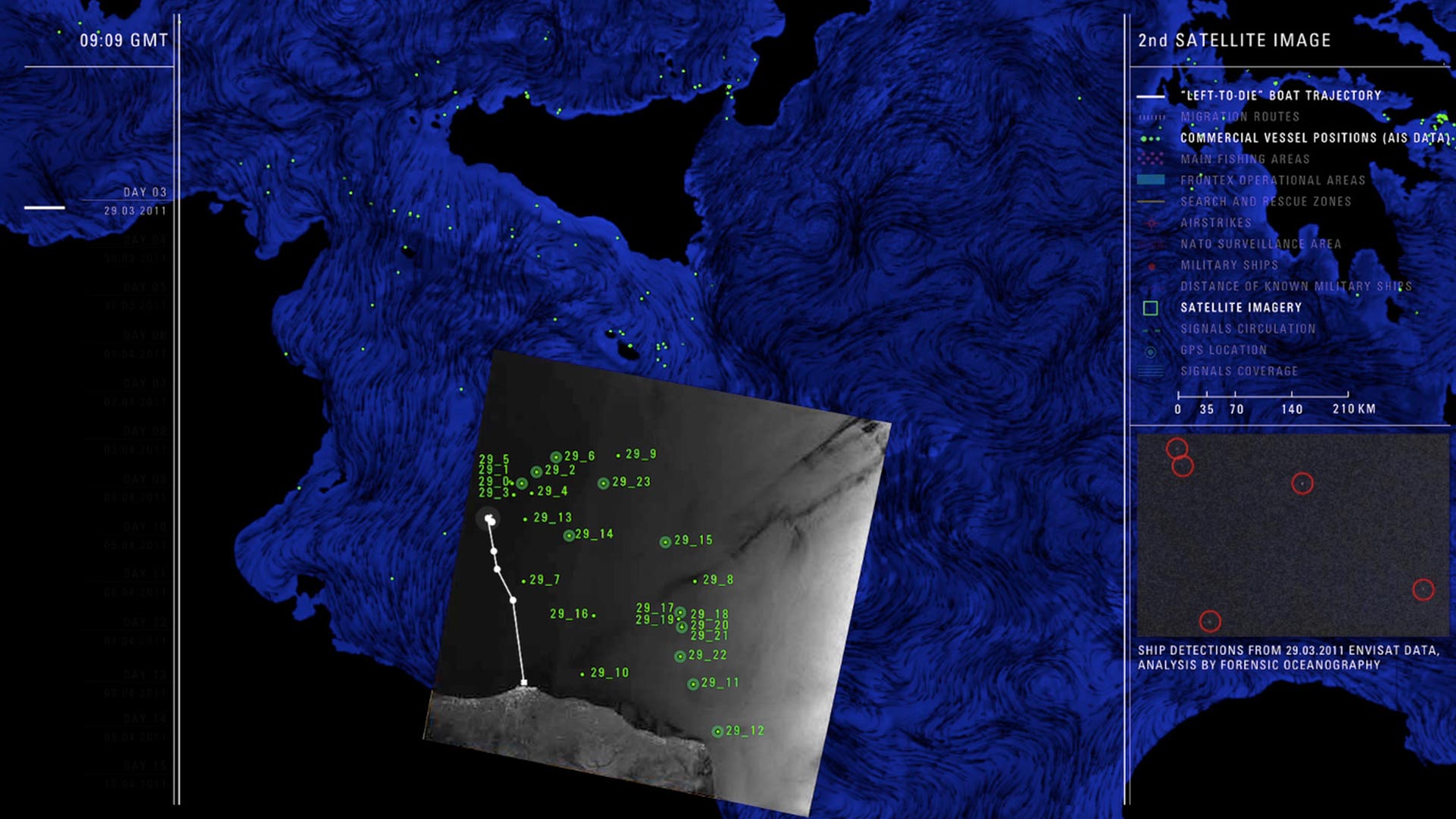 New Works at the Experiences of Exile Exhibition

The Pathfoot Gallery has acquired new works as part of the ‘Experiences of Exile’ exhibition. They highlight the current European border regime and crisis which has forced hundreds of thousands of people seeking asylum into precarious and deadly situations.

‘Liquid Traces’ is a short film which examines the case of the ‘left-to-die boats’ in which sixty-three migrants lost their lives while drifting for fourteen days within the NATO maritime surveillance area. The Forensic Oceanography project was launched in summer 2011 to support a coalition of NGOs demanding accountability for the deaths of migrants in the central Mediterranean Sea while that region was being tightly monitored by the NATO-led coalition intervening in Libya.

By going “against the grain” in their use of surveillance technologies, the Forensic Oceanography project were able to reconstruct with precision how the events unfolded and demonstrate how different actors operating in the Central Mediterranean Sea used the complex and overlapping jurisdictions at sea to evade their responsibility for rescuing people in distress. The project’s final report formed the basis for a number of ongoing legal petitions filed against NATO member states.

‘The List’ traces information regarding the deaths of 34,361 people at the European border since 1993. This piece has been subject to attacks while on display in Liverpool. The gallery includes 'the list' as an act of solidarity with this important project.

While the exhibition sheds light on the necropolitics of the European border regime, it is also important to tell stories of hope, where people who have fled their homes are not only represented as passive victims.

The gallery’s most recent acquisition is a sculpture entitled 'Unpacked: Home from Home'. Original 20th century postcards have been resplendently redecorated with words, collage, and illustration to form the architecture for multi-layered, unstable, but fundamentally optimistic ‘homes’ emerging from an open suitcase. The piece is the result of a collaboration between women who have resettled in the Stirling and Falkirk as part of the government’s refugee resettlement programme, the Edinburgh-based artist, Brigid Collins, and creative writing students at the University of Stirling. 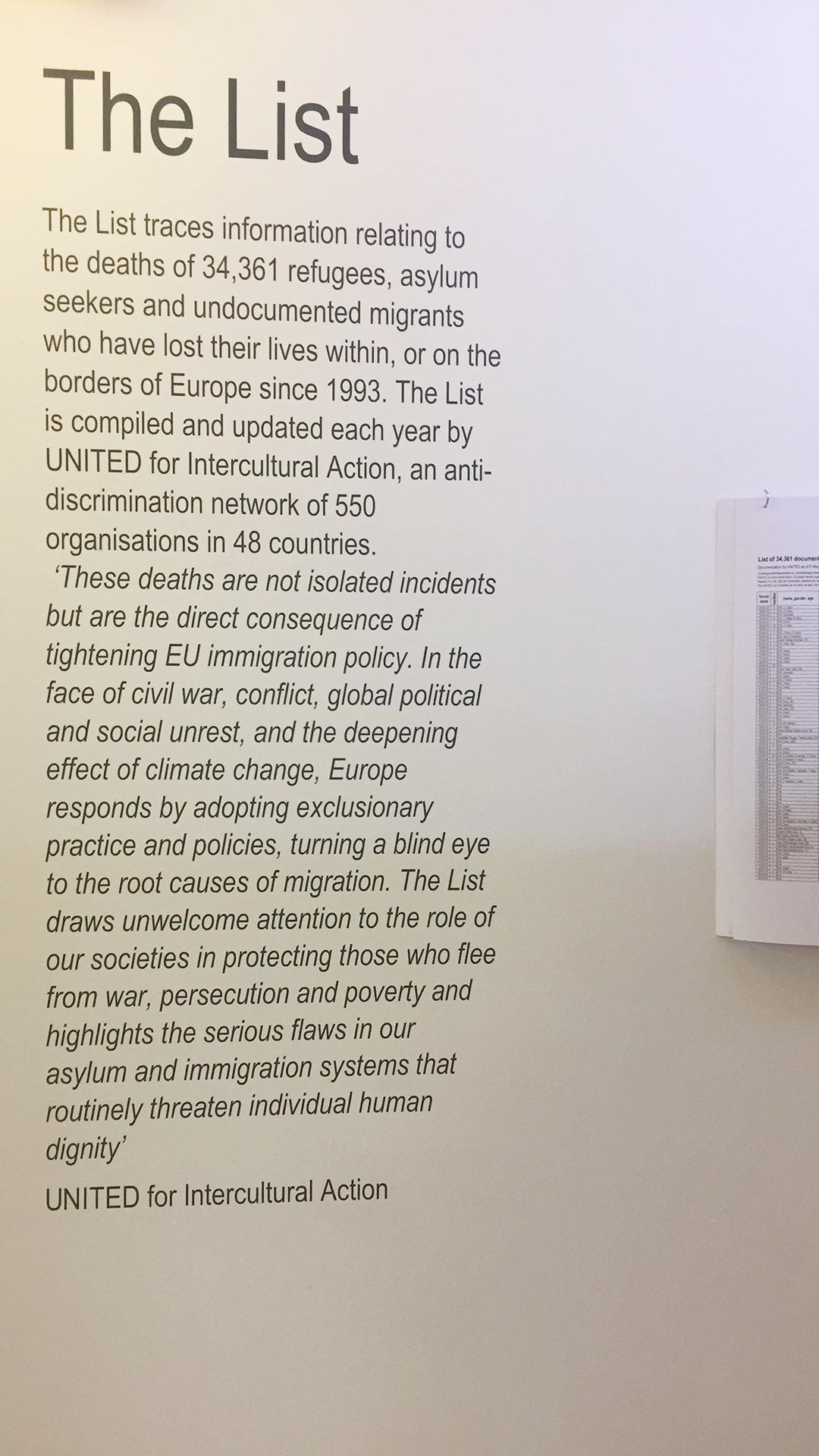 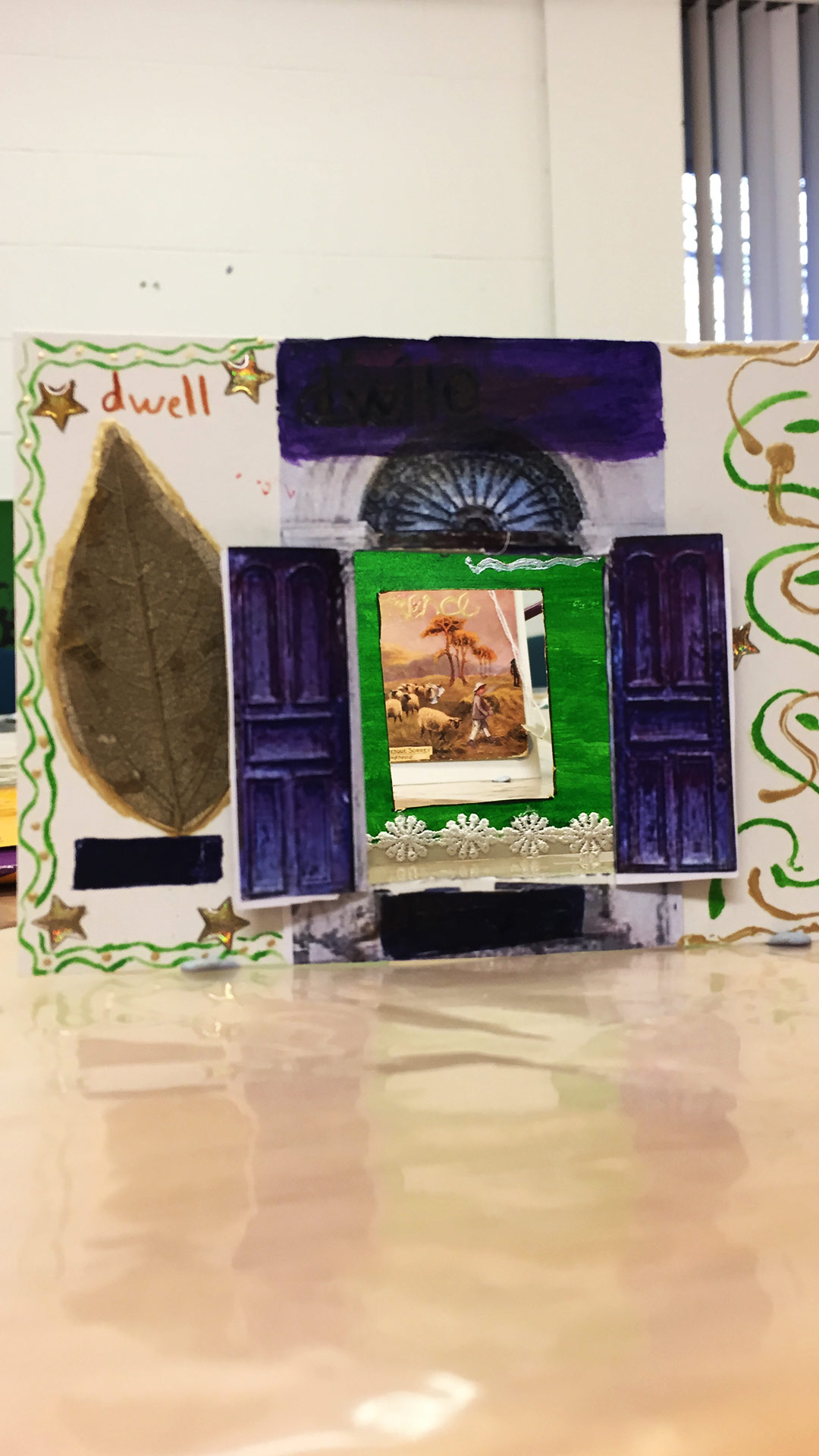 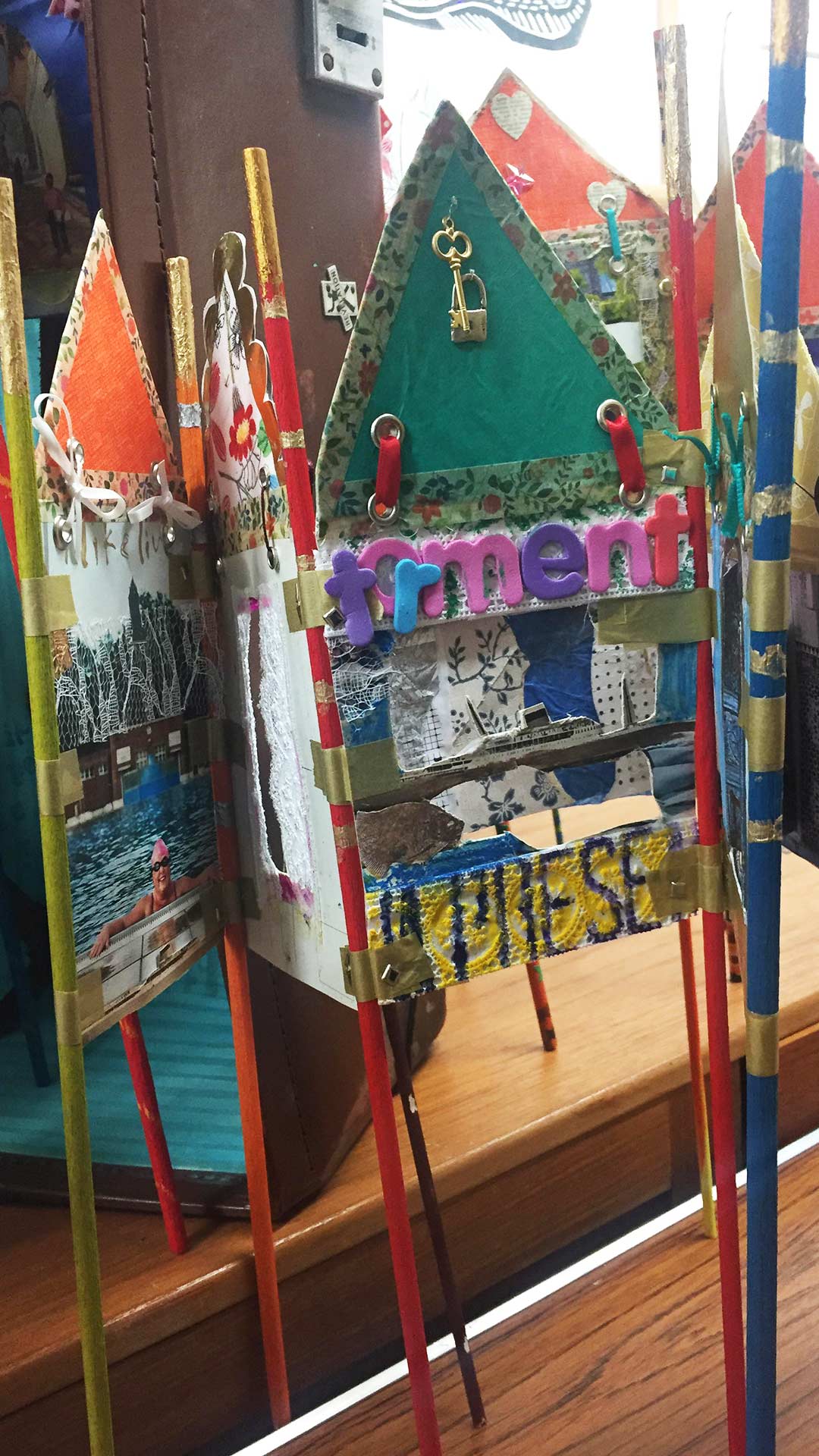 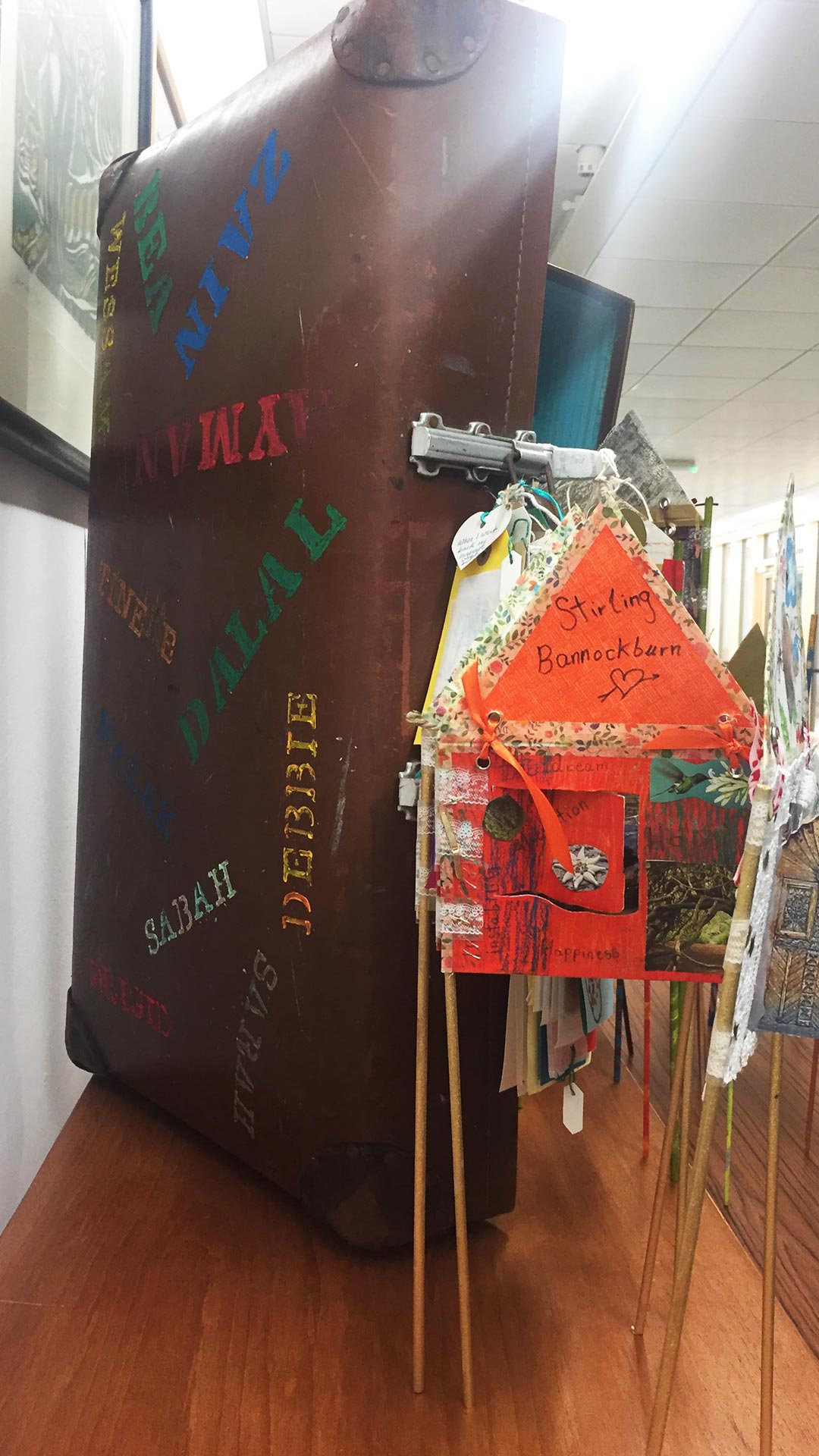 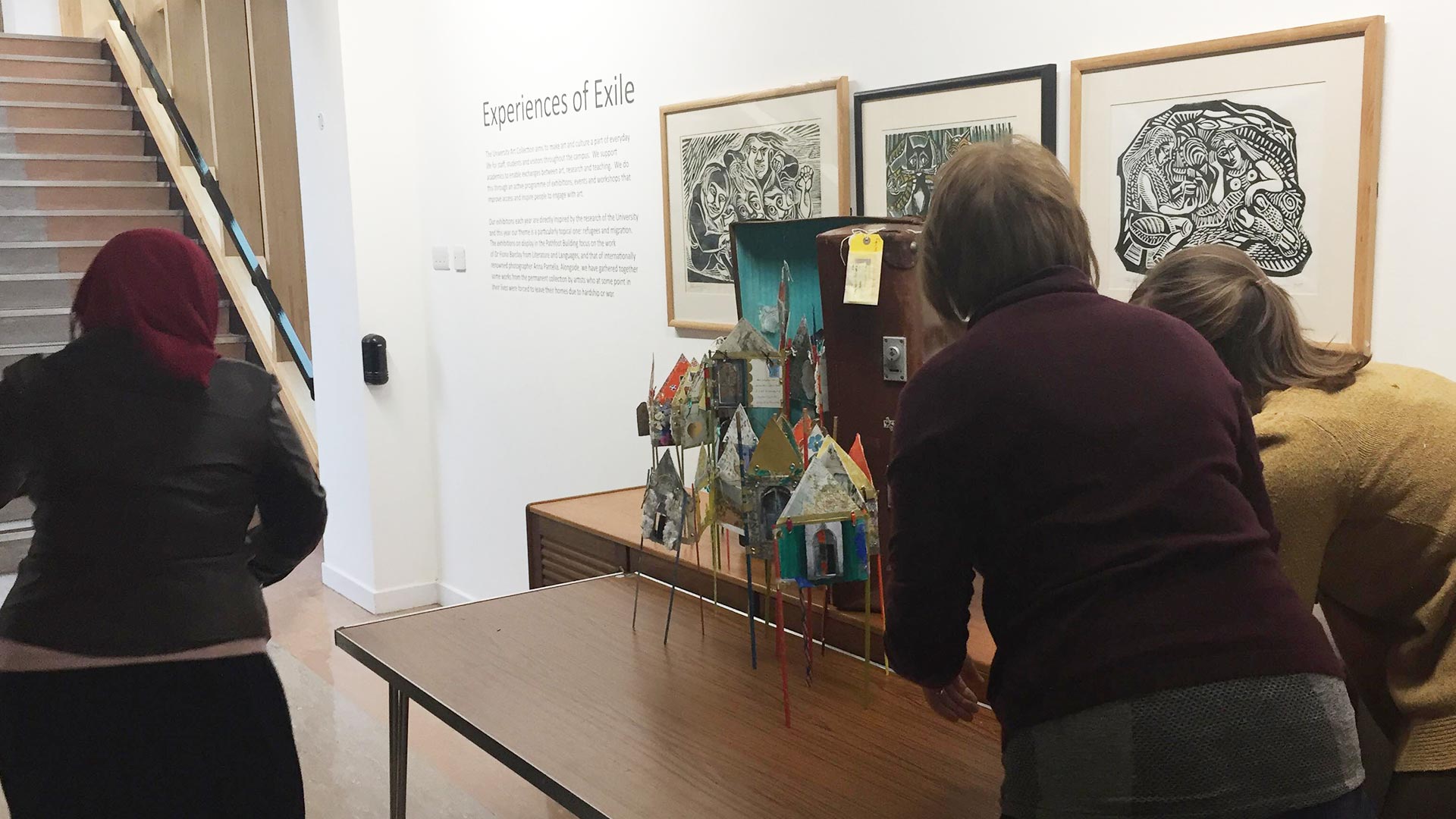 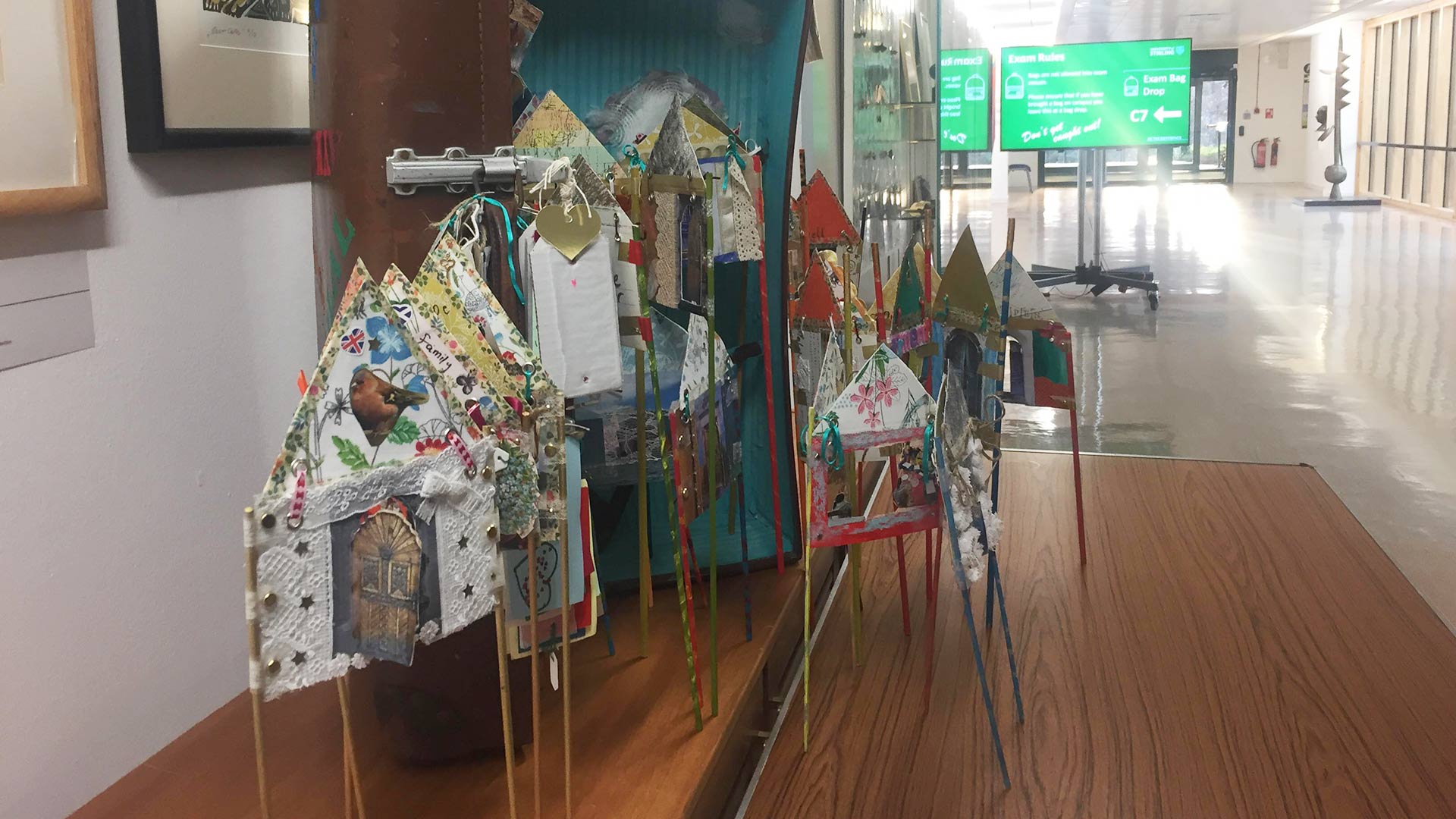 The ‘Experiences of Exile’ exhibition is a collaboration between the University Art Collection and Dr Fiona Barclay as part of this project on the French settlers of Algeria. As such, it is an opportunity to shed light on works from the University Art collection by artists who, at some point in their lives, were forced to leave their homes due to hardship or war.

For example, the gallery displays the remarkable works of Janka Malkowska, who was born in Warsaw in 1912 but spent much of her adult life living locally in central Scotland. During the German occupation, she joined the resistance and hid in the mountains where she developed her practice in wood-printing – based on Polish folk art, she carved her designs into wood with a knife and printed them by hand. She was displaced from Poland after the war but, quite miraculously, managed to rejoin her husband in a Polish settlement in Inveraray. They both became teachers at the Queen Victoria school in Dunblane, joining the Glasgow Print Studio in the early 1970s. She produced works of art until her death in 1997.

'Experiences of Exile' brings together contemporary and historical examples of forced migration. It is a space where multiple trajectories of migration, which are historically, legally, and politically distinct, can nonetheless cohabit, juxtapose, and illuminate one another. 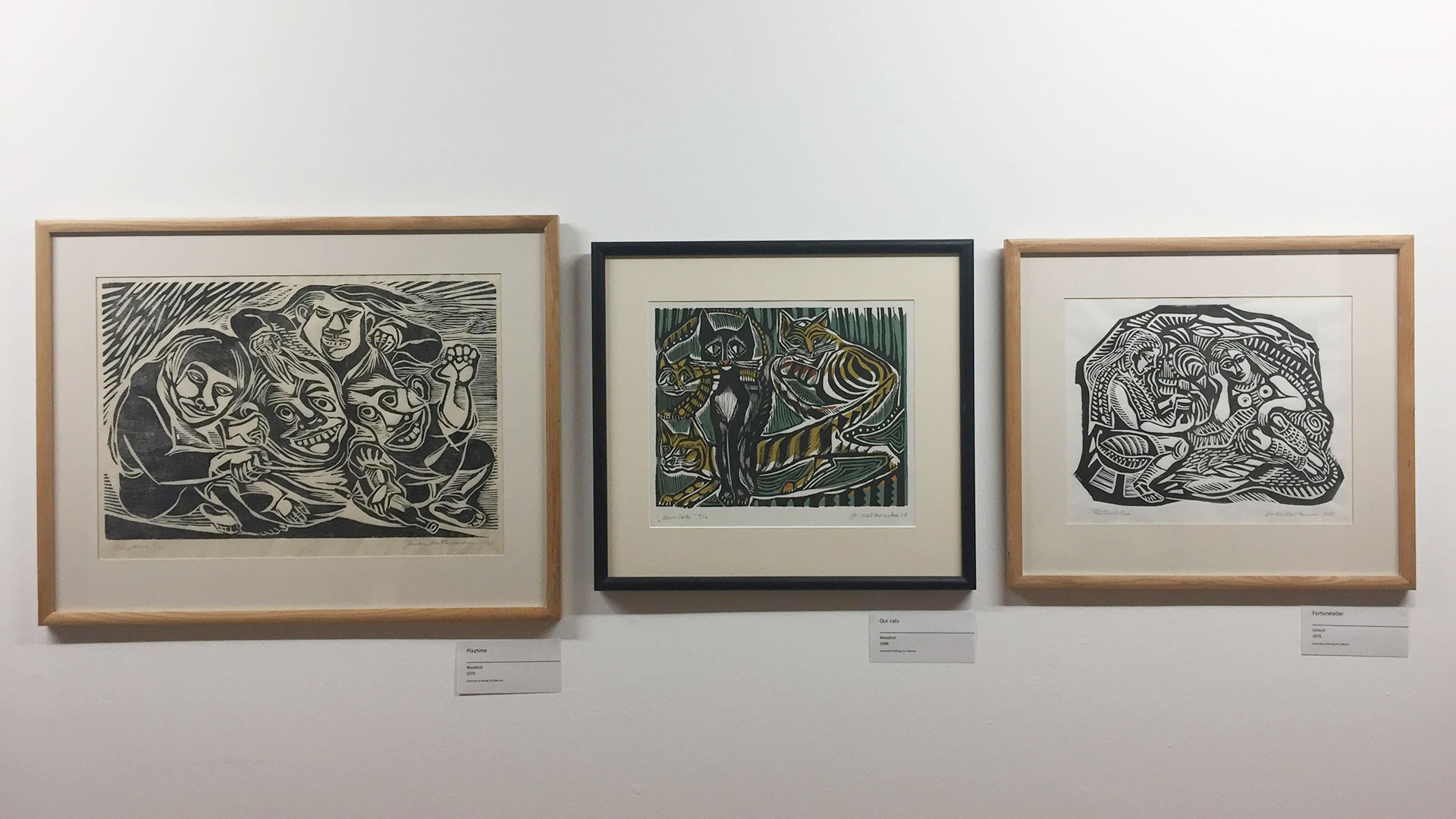