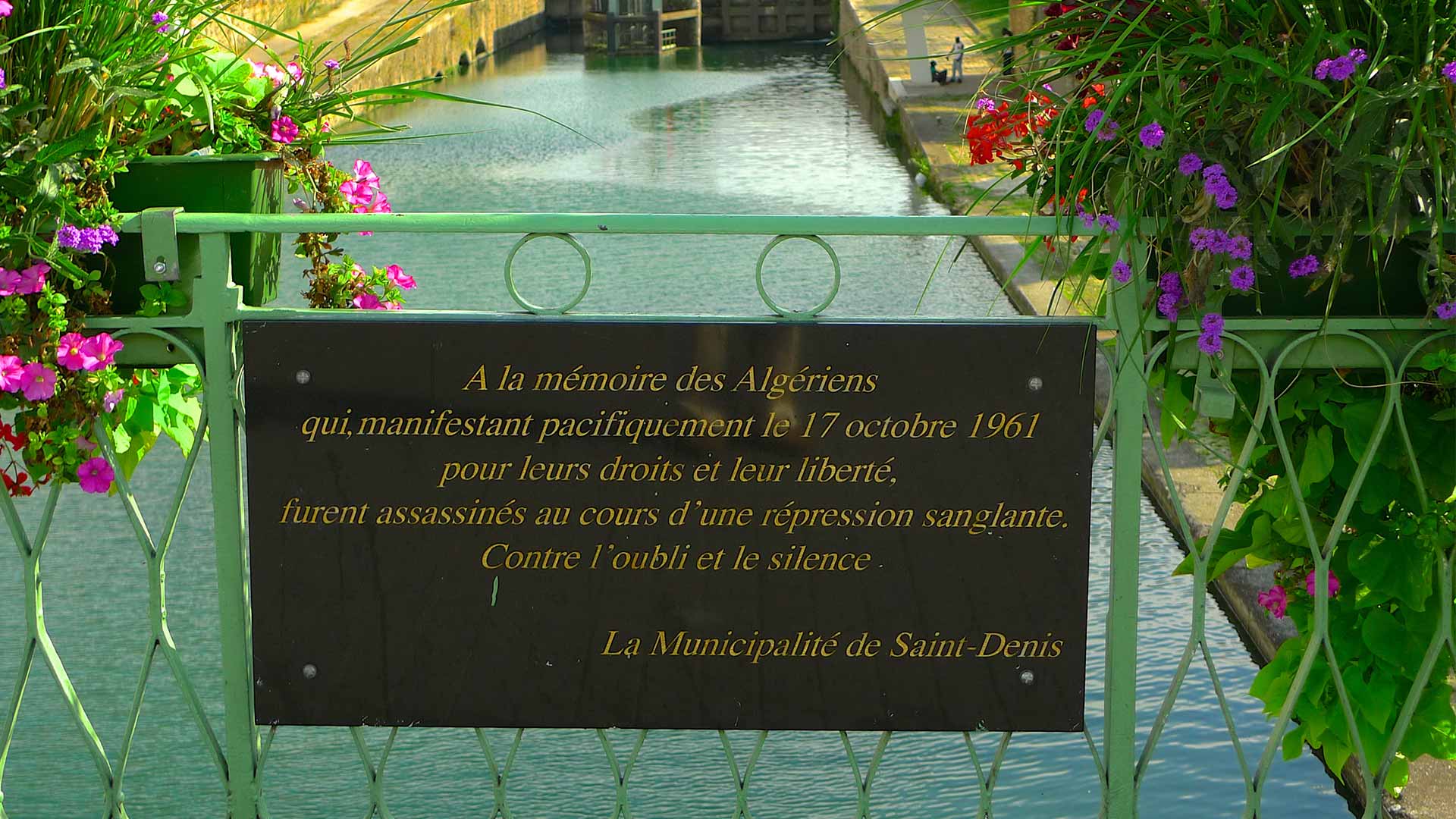 When Algerians took to the streets of central Paris on the evening of 17 October 1961 to protest a curfew targeting français musulmans, they were met with extreme brutality from the Parisian police under the command of Maurice Papon. Since official files were often destroyed or corrupted (and because wounded and dying Algerians avoided going to hospitals for fear of the police) it is very difficult to calculate exactly how many Algerians died as a result of the attacks. However, Jim House and Neil McMaster have estimated that in the month of September and October there were at least 120 deaths of Algerians at the hands of French police. Whereas other estimates are far less conservative, the exact figure will never be known (House and McMaster 2006: 167-168).

Detained and deported, or beaten and drowned in the Seine, this massacre brought the realities of colonial warfare to French soil. In an extraordinary act of courage, on the 20 October, Algerian women and children took to the streets to protest the violence and resist the continuing oppression of the Parisian police. However, the massacre was almost instantly covered up by French officials and press (while not all journalists accepted this silence). Although in 2012, President François Hollande did officially recognise the massacre, for several decades it remained ‘a marginal memory in France, since it does not fit in with any of the various dominant memories within society’ (House and MacMaster 2006: 191). Despite this, there have been several efforts from organisations and communities to actively commemorate the massacre in Paris, the largest of its kind in France since the Second World War.

For example, on the 40th anniversary of the massacre, a commemorative plaque was inaugurated on the Quai du Marché Neuf next to the Pont Saint Michel where the police violence took place and, it is suggested, numerous individuals were thrown into the Seine to drown or hide evidence. The plaque reads:

In 2013, the municipality of Aubervilliers and representatives from the Algerian consulate inaugurated a plaque at the foot of the Passerelle de la fraternité in Aubervilliers, also commemorating Algerian victims of the massacre. In 2015, the adjacent square to this bridge was named ‘La place du 17 Octobre 1961’.

On October 17, 2014, the Soundlandscapes project visited another square named in memory of the massacre, the Place des Victimes du 17-Octobre-1961 in Saint-Denis. Here, they recorded the sounds of the market in this square, as a lasting audio archive of the everyday life of this commemorative space: 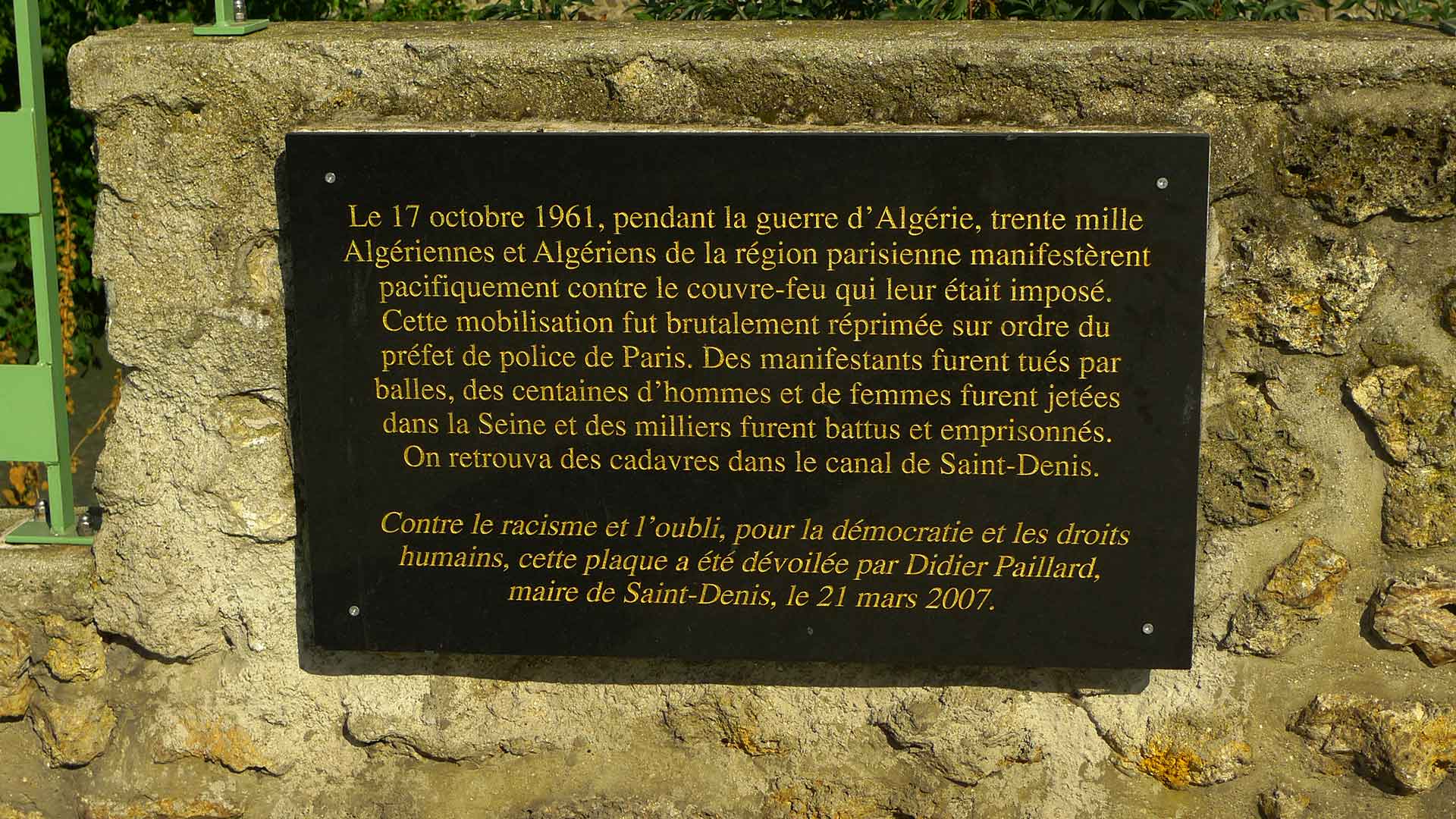 As these few examples show, a tradition has emerged in the last few years of staging commemorative ceremonies on bridges in Paris, where mourners throw flowers into the waters below – associated as it is with the dramatic drownings of Algerian protestors. Initiated by the Collectif 17 Octobre 1961 Banlieue Nord/Ouest, ‘les ponts de la mémoire’ tradition has also spread beyond Paris. In 2017, a remembrance ceremony took place on the Pont du Corbeau in Strasbourg, and this year on Pont de Bezons, just outside of Paris in Colombes.

To mark the 57th anniversary of the massacre in 2018, street artists Joachim Romain and Eric Vinson were commissioned to paint a mural commemorating the massacre and other historical figures along the banks of Canal Saint-Denis in Aubervilliers.